My first Christmas at the barn. Well what can I say? On the plus side, the Aga cooks a wicked Christmas dinner, and my snazzy new freezer providing ‘crushed-ice-on-demand’ made whipping up a Flat White Martini far too easy.

On the down side, my super efficient, eco-friendly heating system decided to start playing up on Christmas Eve. Having finally rectified all the cowboy installation issues earlier this year, it has been working like a dream for the last six months. Sods law it decides to break down on Christmas Eve…

It had cut out when we arrived, and had obviously been off a while as the house was stone cold. I turned it back on, topped up the pressure in the tank, and assumed it would eventually warm up again.

But the next morning the house was still feeling far too cold; the system had cut out again overnight – this time on a high pressure warning.  I tried the good old ‘turn it off and turn it back on again’ ruse. It kicked into life – and died an hour later. I coaxed, I cursed, I swore. No response. Every time I turned it back on, it revved up making a noise like Concorde taking off and 30 seconds later the high pressure warning light kicked in and shut it all down.

The problem with having something like a ground source heat pump instead of a bog-standard gas boiler, is that it is not a mainstream technology. If your gas boiler breaks down, you can just phone British Gas; you’d probably need to mortgage your house to pay the call-out charge on Christmas day, but theoretically it would be possible. But the Renewables industry is unregulated, and as such 90% of firms seem to be cowboys who are clueless about the systems they sell. Finding someone local in an emergency isn’t easy (Read my earlier blog on the joys I had fitting my system if you don’t believe me!).

I am very fortunate in having found a heating engineer who knows my system inside out and back to front. And he doesn’t believe in the bells and whistles and ‘nice-to-have-but-not-really-necessary’stuff that can really rack the costs up. In short, a reliable and honest heat pump engineer – in the Renewable Energy industry that’s like, well, needles and haystacks come to mind ……

Unfortunately he lives a hundred or so miles and a ferry ride away on an island off the West Coast of Scotland. I couldn’t quite bring myself to ring him on Christmas Day.

I waited until the day after Boxing Day and then, feeling very guilty, sent a “Merry Christmas, Happy New Year. P.S. the heatpump’s packed up” text. He phoned me back within the hour. After a lengthy discussion he decided there were two issues: 1) the valve that switches the system between heating and hot water wasn’t working, and 2) there’s air in the system. Not much I could do about the first point, other than turn the hot water off. Fortunately the shower in the cottage is electric, so we did have one working hot shower. It could have been worse.

And I did manage to bleed some of the air out of the heating pipes, which meant the system would work for about 8 hours at a time before shutting itself off. Unfortunately it takes about that long for the building to start to feel warm. So it wasn’t just the G&T’s that were feeling a bit icy over the festive period – we spent most of Christmas wrapped up under duvets!

It’s at times like this, when the outside temperature has dropped and a gale is blowing outside, that you really start to notice how draughty your house is….

These days, building regulations for new builds insist that houses are built as hermetically sealed airtight boxes, to the extent that things like trickle vents have to be manually added, so a little bit of air can circulate without having to open the windows – otherwise people living in brand new houses would probably all suffocate.

Not the case in a barn conversion. As I think I’ve mentioned, the mice (and in places the rain) don’t seem to have any trouble finding their way into the building – so you can imagine what the draughts are like.

As a sort of open plan room with a ceiling up to 5 metres high, my main living room isn’t the easiest space to heat. And with no underfloor heating working, it isn’t helped when the howling gales outside are finding their way in through the ill-fitting door, around all the window frames and under the window cills.

My Dad armed himself with a roll of masking tape and went work, essentially taping us up inside the house.

While I set to work in the music room, where it felt like the Bora wind from Siberia was coming down from the roof.

I found an old duvet, and started putting it to better use….. 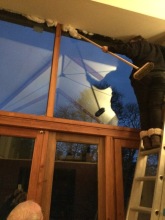 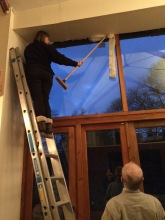 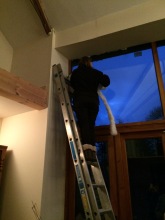 It certainly did the trick. But I’m not sure that the view from outside, where the inside of an old duvet shoved up between the window and the roof space is visible, is really the kind of look I’m aiming for.

I think one of my New Year’s resolutions will have to include finding some more permanent draught proofing solutions. That and getting the heatpump properly serviced….!