It’s less than two weeks until Christmas, which means most normal people will be madly dashing about buying presents, decorating the tree  or writing out Christmas cards to all those people they haven’t heard from since last year.

Me? I’m plumbing a fridge.

The downside of having bought one of those fancy all-singing, all-dancing things is that I needed to get a supply of water to it – ideally before Christmas so I can actually use it for that excess of food and (more importantly) drink that is the custom at this time of year.

I had at least done a little bit of forward planning on this one. A fridge that dispenses ice on demand for the G&T was always fairly high on my list of wants in the kitchen, so when the main water supply was being run through the house, I’d asked for a pipe to be put into the corner of the kitchen.

Quite why anybody thought a water supply should stick out of the wall 8ft above floor level is beyond me, but I’ve given up trying to figure the thinking behind Mr Incompetent Builder’s actions. At least he put a water connection in – when I eventually have the kitchen fitted, I’ll have to hide all the pipework behind cupboards or something.

But before you can plumb a fridge in, you have to get it out of the box. The lovely chaps who’d delivered it had brought in a great big box, put it neatly in its chosen location and then left.

Tearing off all the cardboard was like Christmas come early. But when we had cleared all that away, we were left with the fridge sitting on a polystyrene base, and no obvious way to get it onto the floor. 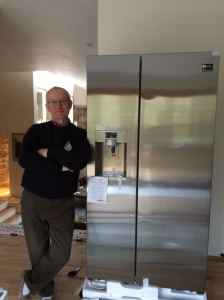 I call this picture ‘The art of procrastination.’ We had looked at it, we had endlessly discussed it, we had gone away and had another cup of tea….

We came up with a cunning plan. Dad and I would tilt the fridge and hold it, while Mum cut half the polystyrene out from under it. Then we would tilt it in the other direction and take the rest out. Simple!

Our endless discussions had been about the fact that it weighed 138kg, so how could we safely hold it, while the base was removed? Flattening Mum under 138kg of fridge if we dropped it was not really an option.

Apparently we were taught the same things at Physics lessons. We decided the law of the lever theory would work – there is a point when an object is tilted where it is equally balanced on its fulcrum so no effort is required to hold the weight. Well that’s the theory…..

So after another cup of tea, when we could procrastinate no more, we put our theory to the test. And it worked. Or at least it did to begin with. We got the fridge tilted to a point where it required very little effort to hold it. Unfortunately my Dad & I are unevenly matched – I was applying more pressure holding it my side, which meant I started to pull it towards me. Which meant it was out of kilter. And the perfect balance/fulcrum was lost. At which point it became very heavy, very quickly…

I think I yelled quite loudly at this point. Fortunately we did still have enough grip between us to lower it rather than just drop it, and Mum did have time to get out of the way.

Time for another cup of tea. And another lengthy debate about whether we should try again. I was still a bit too shaky from having nearly squashed my mum under a fridge to want to try it again in a hurry.

Time to call in the cavalry. I went and knocked on my neighbour’s door. With an extra pair of strong hands supporting the weight from the other side there was no danger of dropping it. Five minutes later and the polystyrene base had disappeared.

In future, any company offering to unpack the goods when they deliver have got my vote.

Anyway, it was eventually unpacked and in its place. That was last weekend. So all I had to do this week is plumb it in…. 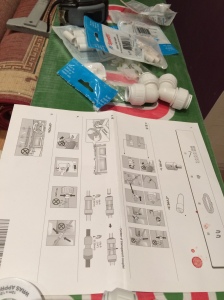 I eventually figured out what I needed, but having rummaged through my bag of leftover fittings from all my previous plumbing jobs, it was evident that a trip to B&Q was unavoidable.

I felt a bit out of place at the checkout. In amongst the trolleys full of Christmas trees, light-up reindeer and singing snowmen, there I am with 2 lengths of PEX pipe, a bag of pipe inserts and a couple of connecting joints….Bah humbug!

To be honest, it wasn’t really that difficult to put together. A few bits of pipe, a couple of connectors. Pushfit makes it fairly simple. The trick I’ve learnt (from previous disasters) is making sure you’ve really rammed the pipes into the fittings.

But the phobia I’ve invented – the-fear-of-the-sound-of-running-water – still kicks in every time I have to turn a water supply on to test a new connection.

I opened up the valve and waited for the water explosion. There was a sound of rushing water as the pipes filled, and the fridge started gurgling madly as it came to life. But all my joints stayed connected and nothing was leaking. Woohoo! I have a working fridge. And half hour later I had ice on demand!

Well there’s a risk there may be no turkey on the table, and unless I get my skates on nobody in my family is getting a christmas present from me, but at least anybody who visits over the festive period will always have ice in their G&T. It’s called getting your priorities sorted….

2 thoughts on “Ice on demand…”