Well it’s the final floor really. The very last floor that needs to be laid is the wood flooring in the main kitchen. And there’s nothing like adding a bit of pressure to assist in actually getting the thing started.

So I went online and ordered myself a swanky new fridge-freezer. One of those all singing all dancing things that churns out ready made ice on demand for the G&T.

But having ordered it, I really needed to get the floor down before it was delivered. I’ve had everything I needed to complete the floor for a couple of months; it’s just been another one of those jobs that kept getting pushed to the bottom of the list – mainly because I was still using the kitchen as a builders site/workshop/toolstore…..

So with the aid of my ever-willing parents, we cleared the room of everything except the Aga and the boxes of wood flooring. Ready to go. Bog standard tongue and groove on the oak flooring and sticky-back plastic underlay. How hard can that be?

Well the real tricky bit is getting it started. Once the wood is stuck down it’s pretty much there for eternity. So you’re a bit scuppered if you haven’t lined all your T&G up nicely.

To make sure you can do that the underlay comes with a bit of spare film to start you off. Just peel back a plank’s width from the underlay, put the spare film in its place, and then you can lay all your wood on top, make sure it’s all nicely aligned, whip out the spare bit of film and then stick it all down. Simples!

Ha! This filmy stuff is like clingfilm – sticks to anything except what it’s supposed to – you, the scissors, any dust it can find – and it fights you all the way.

Still, once you’ve finally got it all in place and got that first row done, the rest starts to follow fairly quickly. 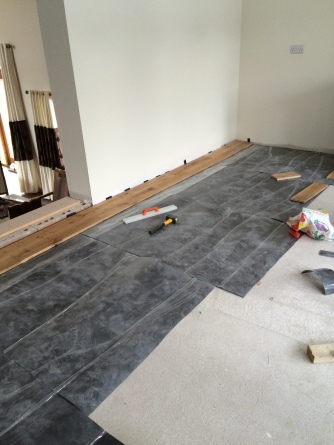 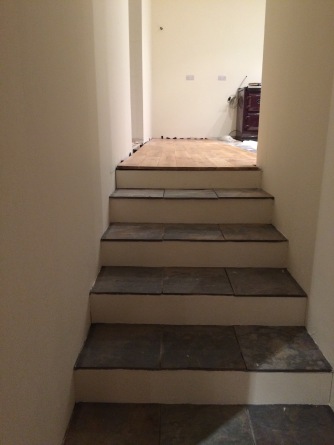 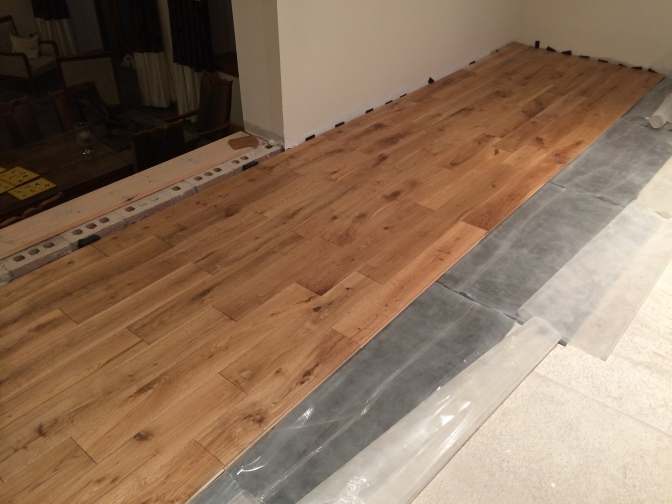 So by the time I had to leave for the airport, I’d at least got enough done to take the fridge-freezer when it was delivered.

I left my parents up there – and they’d sort of mentioned that they would have a go at getting it finished. Well that’s my kind of DIY – it does itself while you’re away… 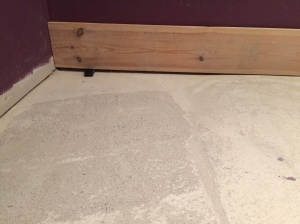 If only. But regular readers will know by now that nothing can ever be that simple in my barn;  the wonky floors struck again. Within a couple more rows, the floor at one end of the room started doing an impression of the nursery slopes at Val d’Isere. Mr Incompetent Builder had obviously been using a deformed spirit level when he put this one down….

So instead of coming home to a lovely solid oak kitchen floor, I came home to a bag of self-levelling compound and the enticing prospect of cleaning out the dreaded cement bucket.

I’ve never used this stuff before. I decided I probably wouldn’t need the whole 25kg bag full, so decided just to mix up half of it. In the absence of any way to weigh out 12.5kg of cement powder I stood the bag upright, measured it, and drew a line half way up. That should give me about the right amount…

I’ve mixed up all sorts of cementy stuff before – plasterboard adhesive, plaster, tile adhesive, grout… so I’ve got a bit of an idea about the necessary consistency of the various types of goo in the bucket.

But this stuff is different. The whole point is that it’s self-levelling. So one assumes it needs to be fairly runny. But how runny is that exactly??? Will it set if it’s too liquidy? I have no idea. I added all the powder down to ‘my halfway down the bag’ marker. But it still seemed a bit too much like runny pancake batter for my liking. Well what do I know? When in doubt, chuck in another couple of trowelfuls…

I eventually got it to a consistency I was happy with, and upended my bucket into the corner of the floor. And watched it ooze itself out into what looked like a lovely level patch of concrete.

But when stuff had hardened enough to take a closer inspection with a spirit level, the self-appointed Harbinger of Doom (otherwise known as my Dad) helpfully pointed out that my self-levelling compound hadn’t in fact self-levelled.

One : Nil to the Harbinger of Doom…

So all showered and changed and no longer in my work gear, I mixed up another bucket of stuff – leaving it much more runny, and upended my bucket again. 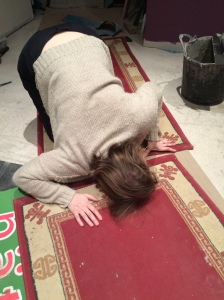 Well this is probably not the most elegant photo of myself I will ever post on social media – but how else do you tell if wet cement is level??

It looked pretty flat to me. And when it had time to set hard enough to take a spirit level, this time it looked like the self-levelling compound did do exactly what it said on the bag. I love that stuff!

It needed to be left for 16 hours before it could be covered, so we’d have to wait until the next day before we could carry on.

But barring any disasters kitchen floor would be finished on Sunday……

Well what kind of disasters could we possible get up there? Waking up on Sunday, it was a grim grey day with a drizzly sort of sleet going on. It didn’t look particularly menacing. 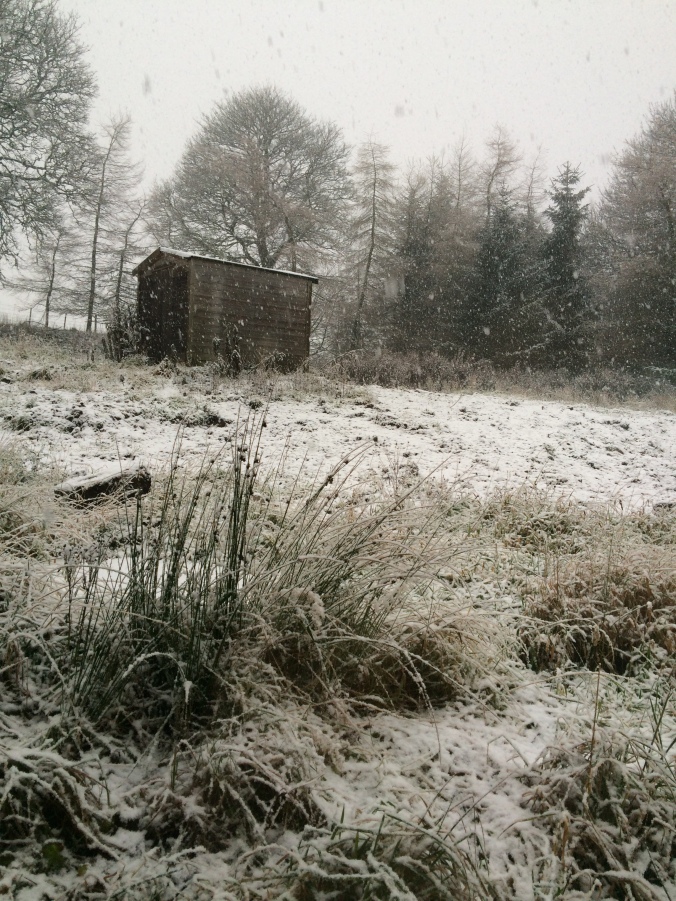 But within about an hour the snow was coming down with a vengeance and suddenly it was couple of inches deep and showed absolutely no sign of stopping. Living in the remote middle of nowhere, there was a real risk the roads would soon become impossible to get through. 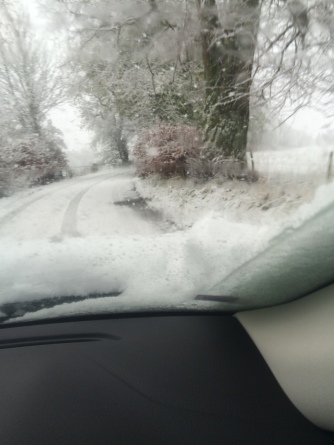 Change of plan. All thoughts of flooring and DIY were abandoned. It was time to leave before we were snowed in.

Maybe I’ll get the kitchen floor finished next weekend…

One thought on “The final frontier….”