Minging! The Scots have such lovely ways to describe their weather. And ‘Minging’ is, frankly, the only way to describe my weekend.

Storm ‘Abigail’ swept through Scotland, battering the West Coast with 90mph winds and torrential rain. And whilst she may not have reached the Central Belt or East Coast with the full force of her fury, she still left some pretty squally weather in her wake.

Perfect weekend to be working on the outside of the house then…..

This is entirely self-inflicted misery – I could have done this when the weather was fair. It’s another long overdue job that I’ve been putting it off because a) I kept forgetting to buy the bits I needed to do the job, b) I was dreading the thought of trying put the ladders up on such horribly hilly ground, and c) well frankly gutters are boring and there are plenty more interesting things to do indoors.

Unfortunately gutters may be boring, but they’re necessary – creating all sorts of problems if you don’t fit them properly. I should know – ignoring my gutter problems has led to saturated walls, washed out pointing and water seeping inside the building. And with all the pundits promising the worst winter ever, I need to get it fixed before the snow arrives.

So I’d decided this was the weekend to get it sorted and not even Abigail was going to stop me! I’d even remembered, when I was passing B&Q last weekend, to nip in and buy all the extra brackets and things I thought I’d need. Not like me to be so organised, but at least it meant that whilst it wouldn’t be a particularly pleasant job given the weather, it shouldn’t take more than an afternoon to get done. After all, bit of plastic guttering – how hard can that be?

Well under ordinary circumstances, not very. But my barn is never that simple. I have to factor in the phenomenal idiocy of Mr Incompetent Builder – who, even though I sacked him about 8 years ago, has left a lasting legacy of shoddy workmanship.

Whether by design or accident the external walls of the building slope inwards slightly. Since some of these walls are a couple of hundred years old, and have shown no signs of collapse that doesn’t seem to be a major issue.

Or at least it wasn’t until Mr Incompetent Builder got involved. Having unintentionally demolished large sections of the back wall by screwing up the foundations, he compounded the problem by not rebuilding those sections in line with those slightly sloping parts of the wall that he’d left standing.

As a result I have a lovely wavy wall and an ‘undulating’ roof line – which may be very artistic, but is completely impractical when the planners have stipulated cast iron gutters. So I have had to defy them on this one. Cast iron doesn’t bend, so cast-iron gutters are physically impossible unless I take down the lovely wavy walls Mr IB has left me.

In an ideal world you put the slates on the roof to overhang your nice straight walls, so rain water runs down the roof into the gutters and away. Simple. Unfortunately since the ‘curves’ of my newly rebuilt stone walls protruded in some places so far from the original walls creating that overhang wasn’t possible either. The slates stopped on the edge of the stone, so the water just ran down the walls.

So when I had the back of the house repointed I’d asked my contractor if he could to do something to fix the gutters properly for once and for all. His answer to the problem was to fix plastic gutter to a wood fascia, and where there wasn’t enough overhang from the slates, to put an additional piece of waterproof membrane under the bottom slate to direct the water into the gutter.

Well that should work. In theory.

And it would have done if he hadn’t then handed the job over to a couple of labourers whom I shall lovingly refer to as Bodgit and Fudgit.

To be fair it was never going to be a simple job. Even before you worry about whether slates do or don’t overhang far enough, there’s the challenge of fixing a piece of wood to a wavy stone wall, whilst precariously balanced 20ft up a dodgy ladder – that’s why I didn’t want to take on the job myself.

But simple or not, if I’m handing over my hard earned wodges of cash to somebody to do the job for me, I expect it to be done properly. Bodgit and Fudgit didn’t seem to get that idea. To start with, plastic guttering, whilst the only option with such wonky wall lines, is nowhere near as strong as cast iron. And in an environment where winter can dump a few feet of snow on your roof, plastic gutters need twice as many support brackets to ensure they can take the weight. Bodgit and Fudgit decided on half the number, not twice the number. That was in part my fault, since I’d ordered in the materials and I’d miscalculated. But rather than get some more and add them to the bill, my lovely labourers just ‘made-do’ with what they had.

As a result, at the first sign of snow last year, half the gutter came down.

I’d decided it was easier to just get up there myself and sort it. Since the wood fascia was in place it was just a matter of adding a few extra brackets and putting the gutter back. How hard can that be? Which is why I found myself precariously balance atop aforementioned dodgy ladder in the wild, windy, squally ‘post-Abigail’ weather with a dozen or so plastic gutter brackets and a screwdriver in hand.

And that’s where I discovered the true qualities of Bodgit and Fudgit.

What is it about some builders and the concept that ‘Water doesn’t flow uphill, or over obstacles, or through wood?’

For on the part of the wall that Mr Incompetent Builder had so spectacularly mis-aligned, those two muppets had fixed the wood fascia higher than the level of the slates. So not only did I have the problem that the slates stopped on top of the wall, which would cause the water to run straight down the outside walls, I also had a piece of wood in the way that meant the only place the rain could now go was back inside the walls and into the house. Pure genius.

I spent a few hours putting back as much of the missing gutter as I could. And then I phoned Bodgit and Fudgit’s boss. 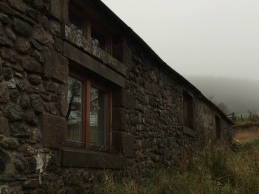 To me the real test of a good contractor is when things go wrong. In an ideal world it’s great (and depressingly rare) to find someone who’s reliable, honest and good at what they do. But you know you’ve found a contractor to hang on to when he can deal with a cold, wet and thoroughly hacked off female having a right royal rant down the phone on a Saturday afternoon, and he turns up a 9 o’clock on the Sunday morning to sort the problem.

He’s promised that Bodgit and Fudgit wont be coming back….