With the builder working on rebuilding most of the walls that he’d demolished, the engineer and architect decided it was time to start on the roof. They had decided fairly early on that some of the roof was going to have to be replaced, and given the state of it, I’ll concede that wasn’t unreasonable. But put an engineer and an architect in a room together for any length of time and it is inevitably expensive. For some reason they’d got it into their heads that just because I’d bought a ridiculously large barn in a 2-acre field, I had access to a bottomless pit of money so no expense should be spared. So the roof conversation went something like this:

Arch: A barn conversion. It needs something impressive. I’m thinking vaulted ceilings with oak beams. If we centre it above the music room, we’ll create some amazing angles as all the different roofs come together.

Eng: Sounds good. But with the weight that will create, we’ll have to double up the size of the oak beams to take the load, and probably put in steel girders as well. It will all need to be tied together somehow, but we can do that with some custom made steel ties.

Arch: Great. Let’s use stainless steel. It will look amazing. And we can then continue the vaulted roof theme along both wings of the house.

Eng: We’ll also need to design something to raise the roof level over the fireplace so there’s enough headroom to walk through to the gallery.

Arch: Why don’t we put a glass roof in there?

Me: Damn there must be some more credit card application forms around here somewhere…..

Well hey, why put in something serviceable and straight-forward, when you can go for something impossibly complicated and very expensive?? (Reminds me of the project meetings with the IT department of a certain bank I used to work for…) The engineer produced a lovely set of glossy design drawings to illustrate what it would look like, and I have to admit, it was impressive. He gave me the prints to keep, but forgot to mention the £250 ‘extra’ that would be added to his next invoice as a result. He then built a little plywood scale model with removable roof to show all the individual fancy rafters inside. He tried to give that to me too, but I politely declined – on the basis that if it costs £250 for two A3 colour prints, I’d probable need a small mortgage for a custom-built scale model. Mr Incompetent Builder, who had managed to destroy most of the back of the house, rubbed his hands together with glee when he saw the design and promptly produced an eye-watering quote to ‘interpret’ the architect’s vision and the engineer’s caution. (I have a suspicion it also included a ‘margin’ large enough to recoup most of the costs he’d incurred in rebuilding the walls.) Whatever – it was way beyond my budget. So, either the fancy beams and steel wires were going to have to go or I was going to have to be a whole lot more ‘hands on’ than I’d ever planned to be. No contest really. I went out and bought a book called ‘Practical Housebuilding’ (being a firm believer in the ‘if I’ve read the theory of course I can do it’ school of thought), climbed up on the roof, and started stripping off all the slates myself. How hard could it be?

Those five little words have caused me more grief than I care to imagine over the last 13 years. As I was soon to learn on this project, it would always take longer and be harder than I planned for. In this case it was largely because the old roof was rotten enough to fall through, and inaccessible enough to fall off. Fortunately I did neither, but not for want of trying… My ‘barn’ is actually a collection of buildings that started as a single storey, single room bothy about 250 years ago, but that then expanded in various directions as the farm grew. It morphed into a building with about 4000 ft² of floor area and  effectively has 5 different roofs that join together in a very complex way. So it was never going to be straightforward – even without an uber-design-crazy architect on board. But as a result of the design he came up with, it wasn’t just a case of removing a few of the dodgier rotten rafters and splicing new ones back in. Nope, we had to take off about two-thirds of the entire roof, leaving only the shell of the (newly rebuilt!) walls standing: 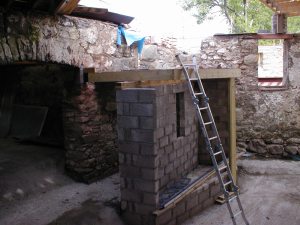 Given the builder had (unintentionally) demolished a lot of the walls, and now the architect had (intentionally) had most of the roof removed, you may well wonder why I didn’t just buy a plot of land and build from scratch – it would have saved a whole heap of time, money and hassle!!

One thought on “Raising the roof!”