In the course of a ‘normal’ self-build, if I’m following the well-established route for getting a house built, there’s a logical order of progress:

This is the point at which the madness began. I was told I had to have a bat survey.

Yes, you did read that correctly! I actually paid somebody a not inconsiderable sum to spend three nights camping on my site to spy on bats. In a wet and windy week in March, in my derelict old barn with no windows or doors, dossing down amongst the mountains of cow dung and pigeon guano – well call me a wimp if you like, but personally I can think of better ways to earn a living! 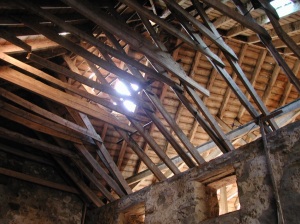 Bats in the belfry anyone?

The conclusion? A wasted effort. The bat poo in the barn was over year old; the bats had moved on. Big sigh of relief – I mean I’m all for protecting our wildlife, but the idea of building little access points and bat houses in the rafters sounded expensive!

The next moment of madness? Fire bells. In their infinite wisdom, the planners decided that my home should be treated as a commercial building and a full scale fire alarm system should be installed.

Now I’m all for putting in safety precautions. Smoke detectors, carbon monoxide detectors – they do save lives. But in all my time reading home building magazines and watching build programmes, I don’t think I’ve ever seen anybody asked to install break glass fire alarm boxes in a domestic house. Not even in some of those humongous mansions that get built on Grand Designs! But try as he might my architect could not persuade the planners that they were perhaps being a bit OTT, and in order to get the plans passed, we had to give in. Little red fire alarm boxes it is.

So here’s the deal. When I’m on my own in the house, (which is most of the time), if I see a fire, I need to run to one end of the house or the other so I can break the glass in the box and press the button so the fire bell rings. Well how else will I know I need to evacuate the building….

Having finally got all the plans and warrants in place, I could go ahead and start some real work. Time to get the borehole installed.

Yep. You read that one correctly too. At the request of the drilling company I paid a wodge of cash to somebody who claimed to be able to find the water sources on my land. Apparently there are people who make a living as water diviners! But for the sceptical amongst you, I happen to know it works. Somebody once demonstrated it for me. Try getting a couple of wire coat hangers, bend them into hooks, go into your garden and walk over the mains water feed into your house. The coat hangers will go crazy. Honestly.

But the lovely lady who was going to be divining for my water also wanted me to send a site plan. I assumed that the kind of topographical and geographical information on a proper site plan would help determine what kind of land formation I had and hence where the water would most likely be found. You know – proper science stuff. Unfortunately my ‘site plan’ looks like something I might have drawn in primary school! 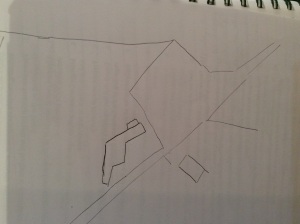 About as detailed as that and I can’t see how that’s going to be of any use to anyone!

Somewhat embarrassed I explained that I only had a very crudely drawn plan. “No worries,” came the response, “the crystals will still work.” The what??? The crystals…… in an office 30 miles away, waving bits of crystal on a string over a drawing of my site that a 2-year old would probably disown, would apparently reveal the hidden sources of water on my land!

I can guess what you’re thinking here; I’m only a few months into my mammoth project and already I’m happily handing out cash to complete basket-cases.

Well, you can laugh all you like, But when the drilling rig was set up in the magic crystal spot identified, 60 metres down, we struck water! Coincidence, maybe, but who am I to scoff? (Perhaps I should have asked what the next lottery numbers were going to be…)

Anyway, now I’ve got the bats, bells and crystal gazing out of the way, can I start building please??